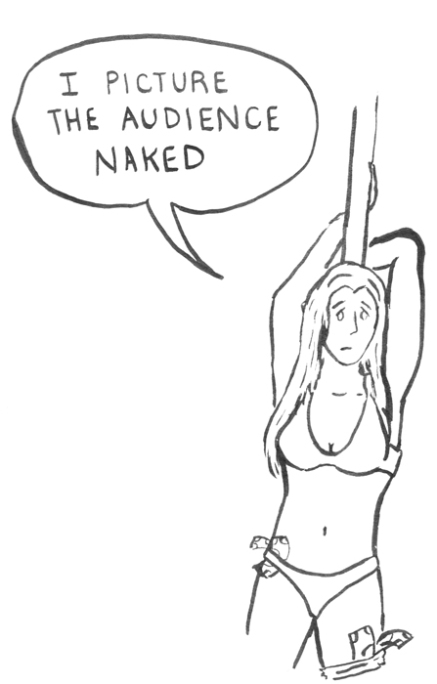 I have been performing stand up for roughly four years and in that time I’ve had to do quite a few shows in some rather unlikely places.  Probably the most notable of the bizarre venues was a strip club in Savannah, Georgia.  The shows were setup up to have a comedian perform, followed by a stripper, followed by another comedian, than a stripper and so on and so forth.  Already the gig sounds like a bit of a trap.  What audience is going to want to take breaks from watching naked women only to have to listen to a comedian complain about his pathetic life?  After all, most of the attendees probably didn’t know that their evening of boobs was going to sporadically be interrupted by jokes.

Luckily my fellow comedians and myself seemed to make these shows work, so much so that we even inspired budding comedians.  Let me explain.  During one show, a stripper finished performing and so the MC walked on the stage to announce the next performer.  The odd thing was that instead of calling out one of my fellow comics, she introduced one of the dancers whom I had seen perform the previous week.  My first thought was that the MC made a mistake, not true.  The dancer stepped on to the stage: “Hi, I usually strip here, tonight I’m going to tell jokes.”  I was so excited.  The idea of watching a half naked woman tell jokes on stage for the first time automatically was going to make for a great story.  As you might expect, her act was a bit of a train wreck (most people don’t quite get comedy the first time they perform).  She got so frustrated at one point that  she gave up, announcing, “Well I guess you’re not liking these jokes so I’m just going to strip for you instead,” at which point she started to take off garments while loud music started to play.  I actually felt badly for her.  Her set wasn’t terrible and I don’t really like to see people get so discouraged their first time out.

Aside from my standup performances, I’d never actually been to a strip club and thus I’d never given money to a stripper.  But, after the strippers performance I decided that I was going to give this woman some money.  I rushed up to the stage with a fist full of dollars. The dancer/comedian came over to me, “You’re one of the comedians, right?  You’re really funny.” I asked her how her first time doing stand up went and she replied, “It was okay, but I was wondering if you had any advice for me.”  Now keep in mind while this conversation is going on she’s naked, gyrating, and men are slipping money into her garters.  So, I began to explain some basics of stand up.  I was interrupted at one point mid sentence, “Hold on just a sec,” she said, and then the dancer proceeded to grab my head, push it between her tits, and essentially gave be a sort of boob head massage.  She eventually released me, “Okay, continue,” she said and after offering her a few more bits of wisdom, she thanked me and moved on to another client.  It was certainly an interesting experience and the woman actually started showing up at other shows and performing. I guess some performers just love to perform no matter in what form.  Hm, I wonder if I’ll ever take up stripping.