I think about superpowers a lot.

I’m in the habit of asking people what they would want for a superpower.  Almost unsurprisingly, most people want abilities that would help themselves out in everyday life.  Teleportation, is very popular as well as the ability to read minds, and telekinesis. My girlfriend, who is not a comic fan, wants weather control, which would be cool, but maybe not super useful hear in L.A. since the weather is generally always nice. But, I suppose if she had the power to control the climate she could make it storm and end this terrible drought.

That’s when I realized that Storm kind of sucks.  Instead of squaring off with villains, she could use her talents to end droughts and inclement weather.  Now I understand that Storm’s powers don’t exactly work that way (or at least I understood after a few of my co-workers calmly explained why my theories are “harsh”).  Storm has to pull the weather pattern from another part in the world, meaning, if she wants it to rain in one part of the world she has to pull the rain clouds from other parts of the world.  I explained that she could probably spare to pull some clouds from Seattle or Vancouver, perhaps even clouds over the ocean.  Some thought it might not work that way, that she just pulls random rain clouds when she creates her storms.  Maybe, but wouldn’t that mean every time someone robs a bank Storm might be causing large parts of the Earth to dry up.  If so, Storm kind of sucks.

Perhaps I’m unfair.  Most superheroes could do better.  Superman could run around in a hamster wheel generator and power entire cities in a couple of hours, sounds a lot more useful than that newspaper job of his. 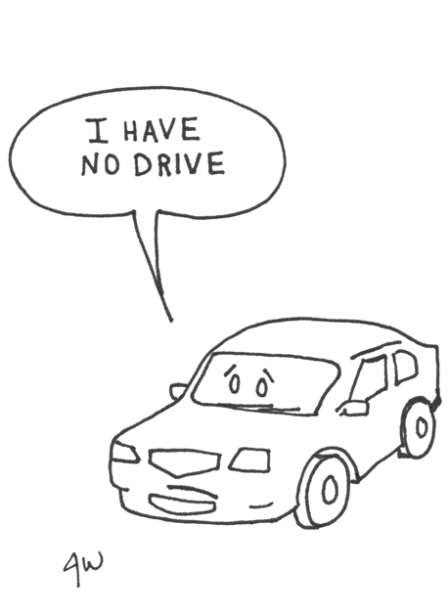 I don’t know what’s worse: driving in LA or trying to park in LA.  Perhaps the latter, because while looking you have to continue to drive around the Los Angeles streets.  I heard an interview with Donald Shoup, a professor at UCLA, in which he shared some findings from a study he did on parking.  In Los Angeles the average driver spends three and half minutes looking for parking.  That seems like a lot, but perhaps not as much as the time that I spend in a Trader Joe’s parking lot.  Seriously, I love Trader Joe’s, but their lots are ridiculous.  I feel like I wait much longer than four minutes in most parking lots.  I remember there was a report that came out in the late 90’s that said people take longer to get out of parking spaces when people are waiting for them.  This is something that fascinated 14 year old Josh, and in my adult years I’ve been trying to see if it’s true.  Unfortunately, I only have one piece of data, I don’t see how long people take when people are not waiting.  I’ve been living in LA for about a year now and something that I feel like I’m noticing is that people take longer getting out of spaces.  Could it be that since we wait longer before parking (3 1/2 minutes) that we feel others should suffer too?  Perhaps I will record some times myself and compare them to east coast parking, but I have somewhere to be in a half hour, and since I am thirty minute drive away I’m already going to be 3 and a half minutes late.