Like many people in the world, I have a job that requires me to wake up early in the morning. And like many people, my mornings often involve the snooze button. There’s something very soothing about the snooze button. It’s sort of like a rebellion to the day. A nine minute stand of sleep. It’s so great that often set my alarm early so I can hit the snooze button a couple of times. There’s only one problem I have found with the snooze button, the nine minutes. Why is it nine? I was supposed to get up at seven, I set the alarm for 6:45, hit the snooze 3 times… Carry the one… What time is it? The nine minutes creates more math for me in the morning. I did research on the topic and I came up relatively empty. No one seems to know why the grace period is set to a seemingly random number.  Some blame early clock makers for being poor at their craft, while others feel that people feel that ten minutes is too long of a time.  People had a lot of theories, but none of them seemed suitable.  I feel like I want to research this topic more and get to the bottom of it, but I suppose there are more important things for me to do with my time. Who cares why it’s nine minutes. After all, it’s nothing to loose sleep over.

Strangers are interesting people.  Sometimes you’ll catch someone out in the world doing something odd and it becomes an odd story you remember for years.  Here’s one from a few weeks ago:

I was in a Michael’s (the craft store) so I could buy paper for these wonderful cartoons, and I was honestly feeling really down that day.  I had just gotten out of a relationship and I had learned a friend of mine had just passed away.  I felt all by myself.  I should mention that while I was stumbling around the store this evening, I was on the phone with a freelance opportunity trying to feel some excitement about a project that I knew was already going to be a huge pain. While on the phone I see a woman standing by a display and she beckoned me over to her.  As I approached, she asked me if I could help her out for a second.  I replied that I didn’t work here, but I mentioned that I was willing to help if I could.  She very blankly looked me in the eyes and said, “When I was young, I never needed anyone and that making love was just for fun.”  This phrase echoed in me and grabbed my attention.  After all, I had just gotten out of a relationship.  As she continued talking I couldn’t focus too much on the words, instead I just felt extremely empathetic.  She didn’t look crazy. Quite the opposite.  She looked well put together actually.  If she looked crazy, it would of been easier for me to just feel sorry for her and walk away, but I couldn’t walk away. I felt really sorry for her.  She continued, saying something about how she was living alone and something about her friends being gone…

“Can I call you back in a second?” I asked realizing I was still on the phone with my employer.  I hung up the phone and she continued speaking to me.  “All by myself… I don’t want to be all by myself anymore”.

Then something weirder happened. She turned into a broken record repeating herself over and over. “All by myself… I don’t want to be all by myself anymore”. I told her it sounded like she was just saying song lyrics, and all of a sudden she ran off.

In utter confusion I called back my employer.  Within seconds of him answering the phone, another woman came up to me.  This woman looked more put together then the first.  First of all, she wasn’t wearing a crazy scarf like the last woman and this lady also was carrying a clipboard.  She had just mentioned I was on hidden camera for the show Ellen.  This woman was going up to strangers and speaking in song lyrics.  Perhaps I should’ve recognized the Eric Carmen song, but then again I was relatively distracted.

“Can I call you back?” I repeated into the phone.

As I signed the release form the clipboard lady asked what was going through my mind during the event.  I told her that I felt bad the woman, that I was empathetic, and that I wished I could’ve done something for her.  I probably should’ve stopped there.  I continued telling the worker about how I had just got out of a serious relationship and how my friend died.  I explained to her that was the reason I was drawn into the conversation.  I realized now that I was rambling too much and that I probably I look like the crazy stranger now.  Perhaps now I am her bizarre stranger story that she tells everyone.

Each year around the holidays it feels like we as a society have the same discussion and each time it feels like there is always a further destruction of Christmas, or as some like to call it “the holidays”.  Every year this issue seems to get worse and worse.  The masses flood to the stores looking for the best deals and get caught up in the consumerism of this holiday. Let’s all take a beat and remember who this holiday is really about- Santa.  I mean why don’t we remember him during our time of shopping?  In fact why are we even shopping? Won’t Santa bring us the things we want as long as we were good?  Perhaps people are shopping because they know they were not good.  After all they did forget about Santa.

I know what you are thinking.  “Gee-Whiz, Josh, if Santa is real why have I not been receiving coal all of these years?” Please, do you really think Santa would waste a precious commodity like coal to be who don’t even believe in him.  No, the coal is for those who believe and are extremely naughty.  So remember to believe in him.  after all Macy’s wants you to.

Why not celebrate Santa by sending the artwork above to your love ones this year. Perhaps even send a card to Santa. I’m sure he will love it.

Side note: Please realize the the above is satire.  I want you to celebrate this time of year however you choose: wether it is Christmas, Hanukkah, Kwanza, Festivus, or perhaps your own holiday you’ve invented.  The only thing that isn’t a joke is that I want you to head over to Openme.com and buy a greeting card (preferably one of mine so I can collect some royalties).  Please do not send any hate mail to me.  However if you do want to send me hate mail… Head on over to Openme.com and send me one of their fine cards on sale and send me one of those.

I work now.  I work a lot.  Roughly 70 hours a week if you’re curious.  I’m working so much now that I wasn’t sure if I was going to be able to maintain this site and continue drawing cartoon.  My job has honestly been the only thing I’ve been able to focus on lately and it feels like it’s been stealing my soul.  In my limited amount of free time, and while I am completely exhausted, I have I still found myself creating art and drawing rather than relaxing.  Turns out, I love art that much.  I guess I haven’t lost my soul… just my free time. 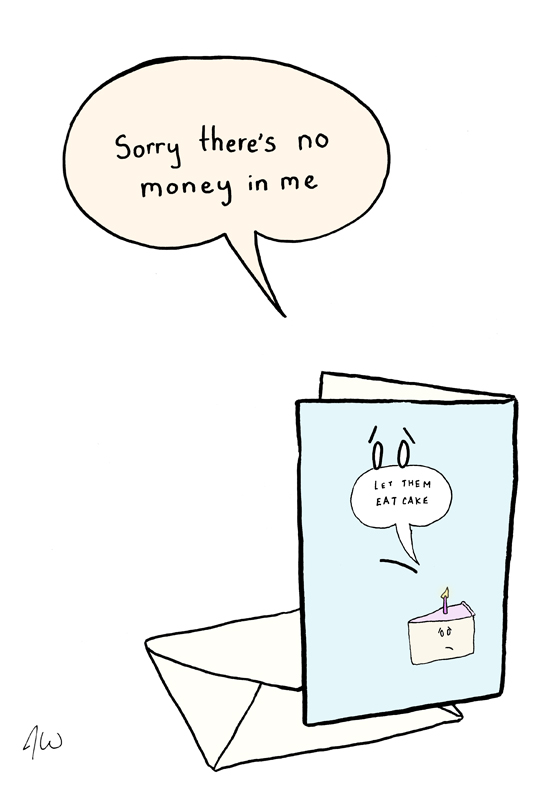 This week has been crazy. I had my birthday on Monday, started a new job as a visual effects artist, and now my cartoons have been turned into greeting cards.  That’s right, Open Me is now featuring my sad cartoons on their greeting cards.  In case you’ve never heard of it, Open Me is a website that allows you to purchase greeting cards, sign, and send them without leaving you house (Wall-e is coming true). Finally no more terrible Garfield cards and having to buy an entire book of forever stamps when you only need one. So wether you need to get a card for someone’s birthday, to wish them a “Merry Christmas”, or to wish them well in a recovery, Open Me (and my sad cartoons) have you covered.

I recently moved into a new apartment, which means for the first time in two years I am living by myself.  The pluses to living by yourself are pretty obvious: complete control over what goes on in the apartment, freedom to be naked, and never having to wonder if your roommate is cool with your friends coming over.  Additionally we all know there is no greater feeling than getting home and discovering your flatmate is out.  There are some plus sides to living with others.  Most of my friends are homebodies which becomes problematic for when you want friends to come over.  But when you live with someone that no longer becomes an issue.  Also whenever I live alone I have irrational fears of choking to death.  Perhaps I just don’t like being alone.  I guess this is why people get cats.  Perhaps I should’ve found a place that allows pets or get friends who are willing to drive.

Hey everybody.  No weird rants today.  I’m extremely busy and sick.  I’ll make it up to you and post another cartoon soon.

Banksy spent the last month in New York; and during that time his artwork was stolen, destroyed, and even sold on the street for $60.  In one neighborhood, shady locals covered his work and charged admission to people who wanted to take a gander at the fresh artwork.  Banksy feels like a modern day superhero: his identity is unknown to everyone, he leaves his marking in places his visited, People are trying to capture photos of him in action, he breaks the law for “good”, and even scales buildings at night (I think he uses a ladder). He has even had rivals, King Robbo, another street artist, feuded with him for years in a “graffiti war” in which the two exchanged licks in the form of covering up each others works.

If we are to think of Banksy as a superhero, the question is: what would happen if his identity was revealed? Would people from Team Robbo hunt him down? Would he be wanted for the crimes he’s committed? Or would people stop caring about him?

Shepard Fairey, another artist known for his iconic OBEY image parodied above,  has his identity widely known and his career has flourished in recent years (other than being arrested in 2009).  He makes images for clothing and designed art for an Led Zeppelin album.  In fact, I’d argue that his famous “Obama Hope” image is more well known than any of Banksy’s images. Yet, for some reason people seem to care about Banksy more. The populous simply loves the mysterious character more (just like in all those teen romance novels).  He’s not just another artist, he’s a mystery. People have claimed they know the identity of the enigmatic artist, but honestly I, as well as many others, probably don’t want to know who he is, at least not yet. I think much of Banksy’s draw is that he is so unknown, and perhaps it should stay that way or else his appeal might become as temporary as his physical art is. 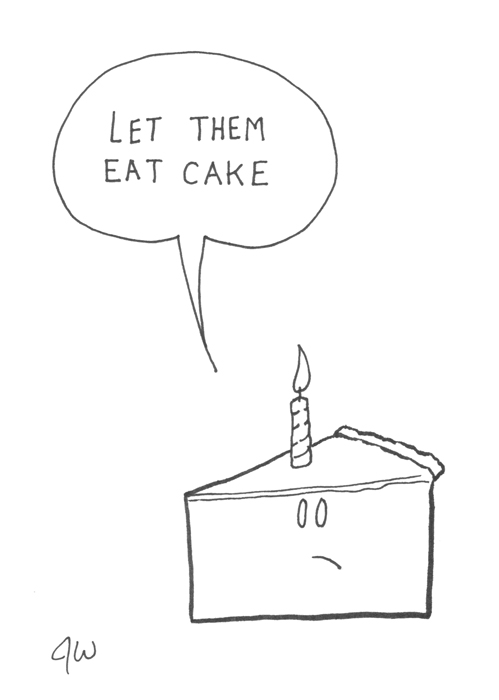